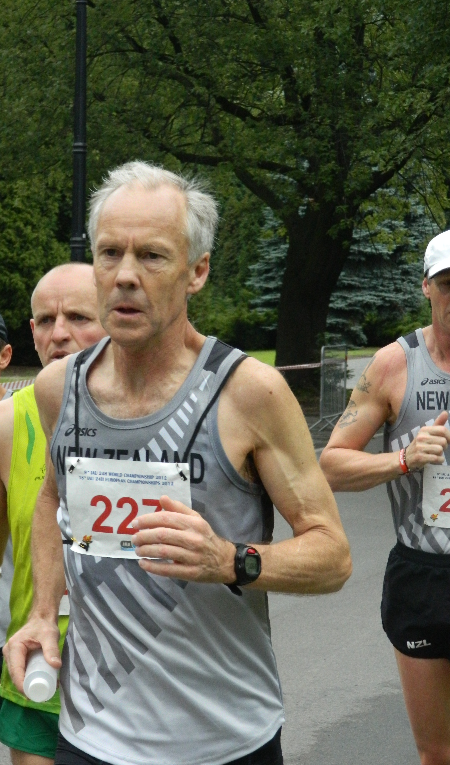 Championships in Llandudno, Wales where the 1km loop course was on a suburban street. I found the bitumen surface good to run on but the relatively tight turns at each end of the loop became a little annoying. Two subsequent events were in Poland and The Netherlands, both on a combination of surfaces which included cobblestones and concrete pavers. These really knocked the old body around.

Training for Sydney over about five months was four 1-1.5hr easy runs, two effort runs of 1-2hrs which could be hill repeats or steady state, and one 3hr steady state or 6hr easy. I only did one 6 hour plus a couple of long races. I also did 7km jogs each evening Mon-Fri. I found these really helped recovery. Total weekly distance averaged 170km. The schedule was interrupted twice. Once for the Tarawera (70km) and also for the Sri Chinmoy 100km in Christchurch. It took a week of easy running to recover from each of these events.

The weather in Sydney was perfect despite earlier forecasts for wind and rain. My wife Janice and daughter Kathryn crewed for me as they have done on all my 24hr events and having good crew is absolutely critical. After 12 hours it is impossible for me to monitor my fluid and electrolyte consumption but they know exactly what and when I need something. They also give me regular updates on how I am going and encouragement when I am struggling.

On the morning of the race which started at 10:00am I had a light breakfast at 7:00am of cereal, fruit, yoghurt, cooked tomato, sausages eggs and mushrooms. Although it sounds a lot I had very little of each. About 9:00am I had 400mls of Perpetuem and a banana. During the race I drank an average of 200mls per hour. Most was Perpetuem with Tailwind (a new product) occasionally just for a bit of variety. For the first 6-8hrs I had 2-3 extra 200ml drinks but through the cooler night it was a bit more than an hour between. I religiously took electrolytes every hour. These were mixed in the drinks or taken as tablets. In total I drank 5-6lts over the entire 24 hours. This was quite adequate. In addition to the drinks I had very little else. The Sri Chinmoy team put on great food but I feel I don’t need it. Just for taste I tried a bit of pasta, porridge, hot soup and milo, mashed potato and cooked mushrooms. I could not eat the mushrooms as I was not able to chew and the potato was a little dry and hard to get down. Apart from the drinks I guess in total I had 200gms of food

. I was determined to start very easy and let the pace slow naturally rather than try to maintain a certain speed. It was easy to know the pace by the lap times. If laps were 2:00min then multiplying this by 2.5 gave the speed of 5:00/km. Every 6secs extra per lap added 15sec per km so it was quite easy to work out on the run. In the previous races I started at about 5:15/k pace but in Sydney it was 5:30/k for the first few laps then 5:40/k until about 9hrs. At that stage I felt I had things about right and although I started to slow I didn’t worry about it. However by 12 hours I was down to more than 7:30/k and thinking I would not even get to 200k, especially if I continued to slow. This was an easy walking pace and I was getting quite concerned. I had only done 118km, 7-8km less than at the same time in previous 24hr races and I was barely plodding.

Then at about 13.5 hours the pace started to improve. I was not trying to speed up, it just happened. By 14 hours I was at 5:00/k pace and felt very comfortable. There were several periods of 4:50/k pace and I was now very concerned about going too fast but did not know what to do. Should I deliberately slow down which was against the plan to run as I felt or do I carry on and risk crashing? In the end I carried on but took every opportunity to slow if I felt any effort at all

. By 16 hours I was back to 5:20/k pace and progressively slowed further but never back to the 7:30/k pace of earlier on. For most of the last 6 hours I was at 6-6:30/k pace with the odd slightly faster periods. Running to how I felt seemed like a good strategy but the pace was all over the show. With one hour to go I felt I had the race won and was going to do a PB so took it fairly easy.

With about 20mins to go Janice gave me a hurry up and I was surprised how easy it was to get back to 5:20/k pace. I finished feeling weary but not the worst I have been. If I can even the pace out a little I should be able to do better. Also during the 15-18 hour period I had a number of short stops to take a drink, leg massage or go to the loo when I didn’t really need to but used it as an excuse to sit down. Despite the pace during this period not being the slowest, it was during these three hours I covered the least distance. I need to toughen up and not stop.

It never occurred to me prior to the race that I could win. My primary goal was to do 215km which is the team qualifying distance for the 2015 world championships and at 12 hours I thought this was well gone. However it is a long race so there is plenty of time to catch up if you do have a bad patch. Anything over 215km was a bonus but to do a PB, albeit by just 1.4km was good, especially since I am three years older. It does show how much of these events depend on mental strength and stamina and it is here I think I have the most room to improve. Physically my training went well and I doubt I can do a lot better here.

Recovery has been quite rapid. I returned to NZ the following day but three days later I was off to Vietnam and China for business and deliberately did not take my running shoes to avoid any temptation to have a go. My first run was back in NZ eleven days after the event and things felt good. Despite this I am continuing with easy runs with the odd day off and will do for at least another two weeks. I am definitely a lot better than I was after Wales so feel I should be able to improve. Hopefully we will find out in Italy next year.